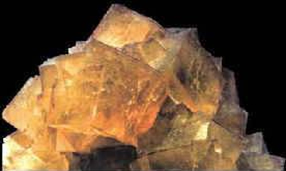 Fluorine (F) is the smallest of the halogens and is the most chemically reactive and electronegative of all of the elements on the periodic table.

This means that it is the biggest bully on the block and is capable of reacting with almost anything in its path.

Electronegativity according to Pauling 4

Fluorine is a univalent poisonous gaseous halogen. It is a pale yellow-green and it is the most chemically reactive and electronegative of all the elements. Fluorine readily forms compounds with most other elements, even with the noble gases krypton, xenon, and radon. It is so reactive that glass, metals, and even water, as well as other substances, burn with a bright flame in a jet of fluorine gas.

In aqueous solution, fluorine commonly occurs as the fluoride ion F-. Fluorides are compounds that combine fluoride with a positively-charged counterpart. Atomic fluorine and molecular fluorine are used for plasma etching in semiconductor manufacturing and in flat panel display production.

Fluorine is indirectly used in the production of low friction plastics such as Teflon and in halons such as freon in the production of uranium. Fluorochlorohydrocarbons are used extensively in air conditioning and in refrigeration. As you know these systems sometimes leak and are released into the atmosphere. Fluorides are often added to toothpaste and in water supplies despite much controversy. Every patient I ever put toothpaste near, that contained fluoride, became extremely weak when muscle testing.

Fluorine can be found in rocks, coal, and clay. Fluorides are released into the air as coal burns. Hydrogen fluorides can be released into air through combustion processes in industry. Fluorides that are found in air will eventually drop onto land or into water. When fluorine is attached to very small particles it can remain in the air for a long period of time which makes it easy to inhale.

Fluorine is found in small amounts in water, air, plants, and animals. As a result, humans and animals are exposed to fluorine through food, drinking water, and by breathing. Fluorine can be found in any kind of food in relatively small quantities; but it is found in large quantities in tea and shellfish. In excess, fluorine can cause can cause teeth to decay, osteoporosis, and harm to kidneys, bones, nerves, and muscles.

Fluorine gas released in industrial processes is very dangerous and can cause death at very high concentrations. At low concentrations fluorine gas causes eye and nose irritations. Fluorine in the atmosphere will eventually settle into the sediment and will become strongly attached to the particles within the soil. In the environment, it can never be destroyed. It can only change form.

Of the three most common halogens that cause problems if in toxic proportion, fluorine leads with chlorine and bromine following behind, in displacing iodine, an element that is required for all cells and metabolic function. These halogens displace the less-reactive but extremely necessary iodine.